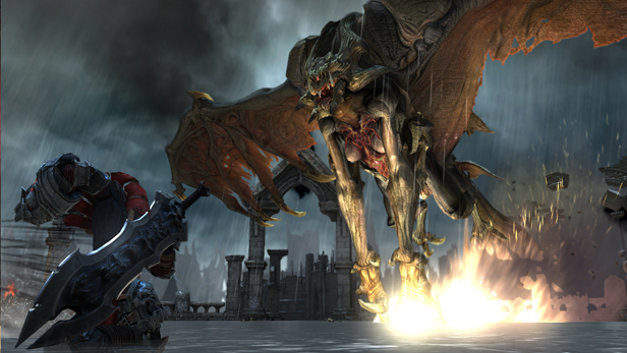 Darksiders put’s players in command of one of the four horsemen of the apocalypse, specifically, War. The game starts off with the world being destroyed, angels and demons falling from the sky for a huge end of the world battle. War gets called back to the between worlds and blamed for the end of the world, paired with a wickedly delicious side kick, and sent on a quest for vengeance that will have him killing every demon and angel he can lay his hands on.

The story is interesting, with a few twists that most players will see coming. Despite this, it does a good job with pacing and the overall story is amusing, with some clever biblical twists thrown in. A quest for revenge ripped straight from God of War is made fresh by a brilliant voice cast, featuring Liam O’Brien and Mark Hamil in the starring roles as War and his malicious side kick. In fact, the voices sell the entire story and without such great actors to give emotion to the characters, they’d seem rather one dimensional as War is out for vengeance and his side kick is aiming to kick him while he’s down.

The visual aesthetic is what Darksiders should be most noted for. While it is a Zelda clone without shame, this is not Hyrule. The world is destroyed, with remnants of human society lingering amidst huge deserts, plains, jungles, and even amidst a volcano. Angels have a distinctly mechanical look, while demons are highly organic. War is somewhere in between. The art design for the world is stunning, with environments that are cleverly intertwined, somewhere between medieval world and post-apocalyptic nightmare. The unique take on War and the end of the world is one of the few unique things Darksiders has going for it.

Gameplay in Darksiders is a mixed bag. There is Legend of Zelda style exploration, where War must find items to advance his quest, such as a boomerang, a hook shot and even a portal gun, stolen directly from Portal. This is functional at least, but totally derivative. Anyone playing Darksiders will feel like they’ve played a different, better game. Combat at least tries to break things up, but it gets tedious quickly.

Combat is a lot like God of War. Players fight to string together short combos, so short the game could become a button masher quickly while finishing players off with quick time events. Thankfully, only finishers use this and the rest of the game is QTE free. While combat, with its fast combos, flashy style, and unique finishers will initially wow, there are a copious amount of enemies that will wear the player out quickly. Also, War can throw cars, in an interesting, but a vestigial feature. If he could throw all types of scenery, it would open up a new level of strategy to the game, but only cars, of which Darksiders has very few.

There is very little reason to replay Darksiders because even on the hardest difficulty it is ridiculously easy. After an intensely frustrating first boss, the game is laughably simple. Besides that, there are only a few unlockables, none of which really wow the player. The game is at least long, clocking in at just under twenty hours, but once you’ve seen it, you’ve seen everything.

Derivative, but Still Worth a Look 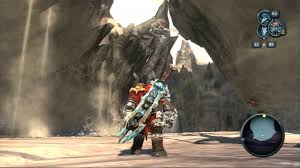 There is no denying that Darksiders steals from better games in nearly all areas, save for art and sound, but at least it makes the gameplay somewhat fun. It may be derivative and easy, but Darksiders is an enjoyable enough ride. Let the voice actors play their parts and you may actually find yourself rooting for a sequel, as Mark Hamil’s wicked jibs and Liam O’Brien’s smooth tones will quickly grow on players.

The art style will wow players and the story is interesting enough to capture people’s interest, but players seeking something new should steer clear of Darksiders. If all players want though is a fun time sink while waiting for the next new thing, there are far worse games than Darksiders. It’s fun and interesting, but neither deep nor innovative. It’s derivative, but at least in a good way.