Portable hard drives are becoming more and more appealing as we grow more dependent on our data. Having it backed up in a secure hard drive that you can always have with you makes using and sharing your documents, photos etc. very easy. This is where Western Digital’s My Passport comes in, as it has all the features a great portable hard drive has.

Starting off with the basics, My Passport is available in 1TB, 2TB, 3TB, and 4TB capacities. It uses the USB 3.0 data connection, which also powers the drive and is backwards compatible with USB 2.0 ports (don’t expect the same speeds, though). The drive comes with a slightly shorter 2-year warranty but, seeing as the vast majority of customer reviews are positive, you probably won’t even need it. WD My Passport also comes with three software tools to help you get the most out of their product:

The drive will also contain the WD Discovery software, which is less of a standalone tool, and more of a launcher and update software for the other WD programs. Overall, the software package included with the product is solid, to say the least. The only downside to it might be the lack of an NTFS driver for Mac users, which would complete a Swiss army knife of software tools, but maybe that’s just me. 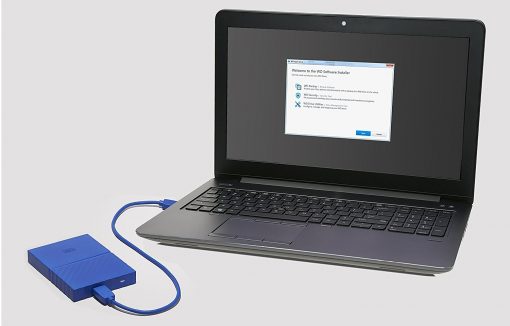 This 5400RPM drive’s performance is around the usual 90-110 MB/s, which depends on too many factors for us to give an exact number. My Passport is compact enough to easily fit in a backup or a purse.

The re-designed drive case features a wave pattern on the bottom half of the drive and a sleek, polished design on the top half. My Passport’s interesting design is available in a variety of colors – black, white, blue, red, orange, and yellow. It’s also available in black-silver and white-gold schemes supposedly called My Passport Ultra series, which is actually the name of an entirely different portable hard drive model from WD. However, telling the difference between the two models is easy, so this is just my scrupulous inner-researcher ranting about the somewhat unorderly way WD represents their products. 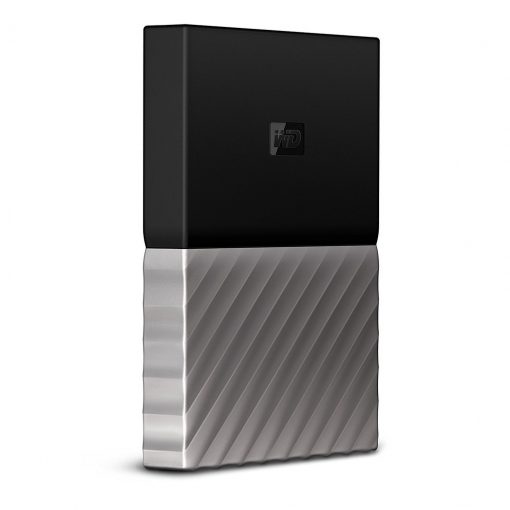 For the sake comparison, we picked two other all-around decent portable hard drives – Seagate Expansion and Toshiba Canvio Connect II. The Expansion is, on average, a bit cheaper than My Passport. However, the reason for this is the lack of any native backup and security software features, as well as a shorter warranty of just 1 year. The Expansion portable hard drive is as bare-bones as it could be, making the lower price much less appealing, especially in comparison to everything that the Passport has to offer.

As for Toshiba Canvio Connect II, the price, on average, is roughly the same as Passport’s, with Canvio also including an NTFS driver for Mac, making cross-platform installation and usage easier and hassle-free. The Canvio is also a bit smaller than most other external hard drives, My Passport included. So if saving every cubic inch of space is important to you, and/or if you want a cross-platform drive for both Mac and Windows computers, then the Canvio would have a slight lead over My Passport. If you’re looking for at least 4TB of portable storage, though, know that the Canvio only has 3TB of capacity max, making My Passport the more appealing choice here. For more alternatives, check out our best portable hard drive list.

On first sight, the drive’s design really stood out with its unusual pattern and bright, red color. The 2TB My Passport that I got functioned as promised and was fully ready to use after installing the WD Backup and WD Security software tools. A couple months later, I still haven’t run into any issues with the backup process or the security features. As mentioned before, the drive’s speed depends on the weather as much as it does on anything else. Speeds on Mac were around 103-108 MB/s mark, while after some backups and usage, the speed on my Windows PC was more around 95-100 MB/s read/write. This is common, as hard disk drive speeds depend on the files they work with, the drivers they use etc. 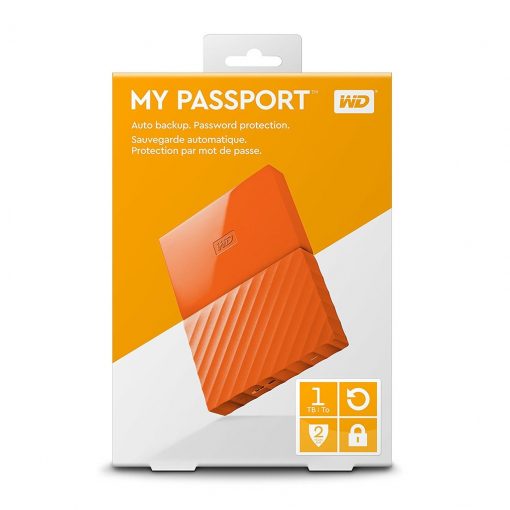 Although my own experience with the drive’s software and the drive itself was pleasant, some other customers have not been so lucky. While bad reviews for My Passport are few and far between, they mostly share the same problem, that being data loss. This might indicate a software issue more than a hardware/firmware one, so the best advice to avoid such data loss would be to use backup tools that you’ve already used before and trust, thus avoiding driver and compatibility issues between the drive and your computer. Very few people reported fatal issues, with some being more concerned about the clunky interface and lack of simple explanation of how to use the software tools. Nevertheless, the vast majority of users were happy with the product.

The package includes the WD My Passport hard drive itself, a USB cable, and a quick installation guide. A setup file for WD Security, WD Backup, and WD Drive Utilities is already saved on the hard drive, making the installation process faster.

My Passport is an all-around great hard drive, providing up to 4TB of storage at decent hard drive transfer speeds. The included software package contains everything that an average portable hard drive user might need – backup, security, and data management tools. The eye-catching design also doesn’t hurt the value proposition for this reasonably priced drive. All in all, this is a great portable hard drive choice for both experienced techies and more casual portable hard drive users, which makes it one of the best and most popular portable HDDs currently.