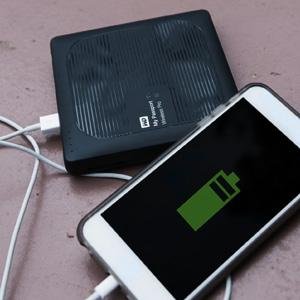 Besides the updated design major changes are around file management, which is much more natural this time. Unlike the first model who automatically pulled all new photos from SD card, with the new Wireless Pro, you can wirelessly browse and choose which files you want to sync.

Like the previous My Passport Wireless model, the new version has an SD card slot and Wi-Fi. You can import photos to the drive via Wi-Fi, once the images are on the drive, you can wirelessly connect to it with a laptop or tablet. After connecting to the drive, you can easily view and manage all data that’s have been backed up on Wireless Pro.
Much faster and with twice as big battery
Wireless Pro has a faster SD card slot with significantly increased file transfer rates from 10Mb/s up to 75Mb/s. Western Digital also improved 802.11ac Wi-Fi speeds from 9Mb/s up to 20Mb/s. The old 3400mAh battery is now replaced with twice as big 6400mAh battery, which as Western Digital (WD) states can last up to 11.5 hours, including 6-8 hours of hard usage.
This new feature can save a lot of time for photographers by allowing to select just the best images for further revision. To easily manage your content from smartphone or tablet, Western Digital (WD) has created Android and iOS apps.
New My Passport Wireless Pro comes only as HDD (not SSD), with larger capacity: a 2TB and 3TB (old model wireless external hard drive is available in 1TB and 2TB of storage).

Since about 50% of all users primarily used the original product as a content streaming device, Western Digital has added a PLEX media server to My Passport Wireless Pro.
At the same time, Western Digital has introduced a Pro version of WD My Cloud line, which is NAS (network attached storage). The highest capacity model will come with a massive storage of 32TB.