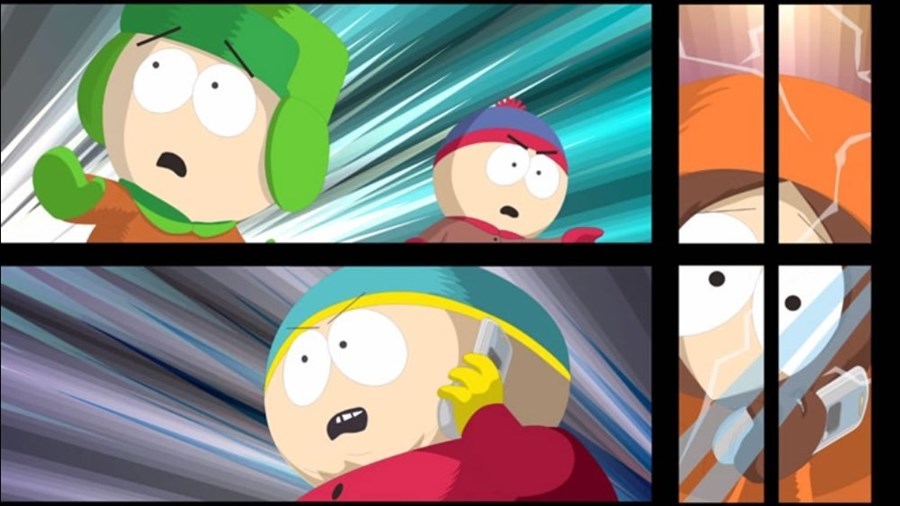 With Season 13 surprising even longtime fans with high-quality episodes, hilarious writing, and a more detailed art style, South Park Let’s Go Tower Defense Play could not have come at a better time. Released as a kickstart to the second half of the season, this South Park game for Xbox Live Arcade features 4-player co-op, playable fan-favorite characters, difficulty levels ranging from casual to insane, online gameplay, and tons of South Park extras.

For those who don’t know, the Tower Defense genre challenges players to fend off wave after wave of enemies with upgradable towers. Bad guys do not attack directly, instead they march from one end of the screen to the other, and if they make it to the end the player loses HP, and if all the HP is gone its game over. Tower Defense games became popular as free online games offered by independent developers, and have only recently penetrated the gaming market.

After a few rounds, South Park Let’s Go Tower Defense Play feels surprisingly authentic, even with the disappointing storyline. Some evil being controls massive waves of various enemies to attack South Park, and only Stan, Kyle, Kenny, and Cartman can discover the identity and put a stop to the evil-doer. Each story segment consists of little more than the kids saying, “Watch out! Enemies are coming!” with still images in a comic-book style, no animation. 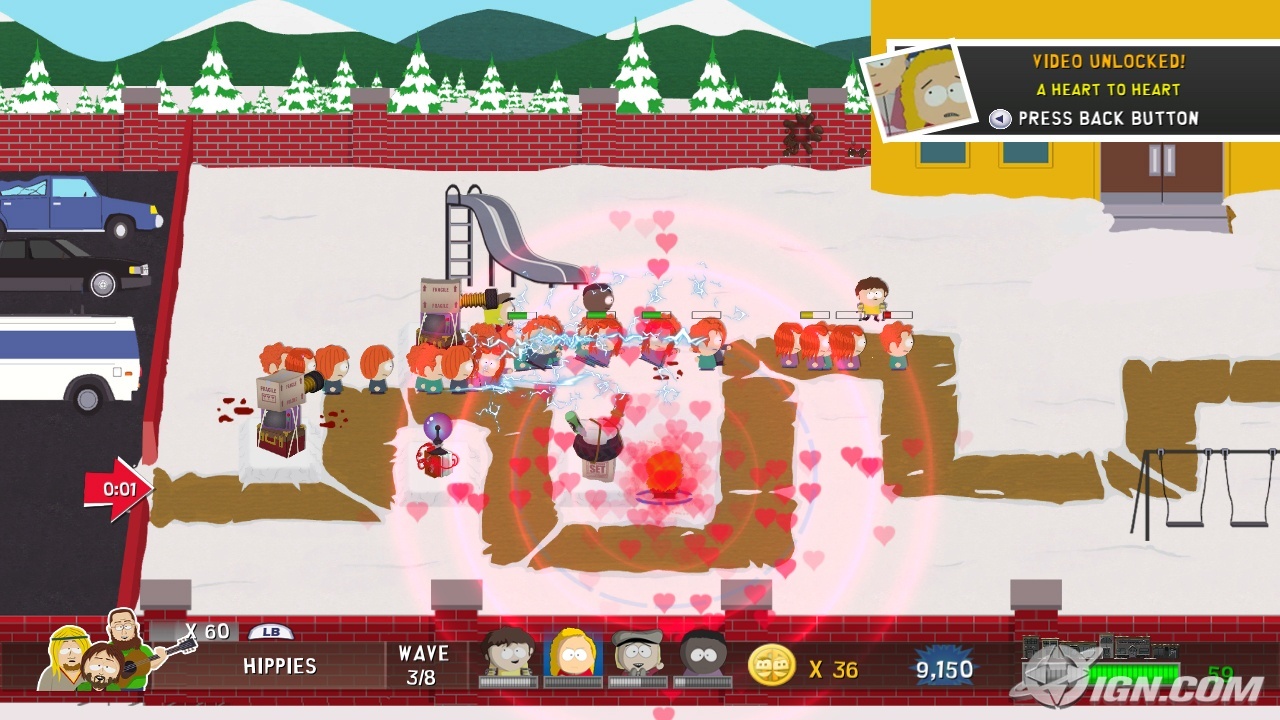 As a unique twist on the tower defense genre, the player controls 1 of 4 characters at a time, while the characters not under the control of a player will act as an additional tower by sitting in one spot and hurling snowballs at any nearby enemies. While controlling the character, the player can build towers and walls, upgrade towers, throw snowballs at enemies (or at nearby environmental hazards to trigger them), and perform special powers. But getting in the way of the enemies results in the character getting “downed” and must be revived by moving another character close by.

Unlike many tower defense games, all actions are allowed at any time. Players can run in-between enemies during waves to collect coins, and building and upgrading towers can happen anytime, allowing for on-the-fly planning.

South Park Let’s Go Tower Defense Play is incredibly fast-paced and frantic, especially playing single-player, where one player must micro-manage four kids and an entire level of snow walls and towers. For those who find micro-management frustrating, playing with friends or random people online is a better option.

Towers: The various towers featured in SPLGTDP are pretty standard tower defense affair. The Laser Tower deals low damage to all enemies in the line of fire, the Cat Pee tower launches poison pee dealing gradual damage over time, the Fireworks tower shoots lock-on fireworks which explode on multiple foes. Etc. All towers can be upgraded once. There’s nothing really new here, but each tower does feel uniquely South Park.

Enemies: Again, pretty standard for the genre. There’s the quick but weak Christmas Critters, the slow but tough Mongolians, and weak Ginger Kids that show strength in numbers. Other enemies include Gnomes, Old People, Crab People, Demons, and more, with the occasional boss character as well. Each enemy type has specific strengths and a specific tower that it is weak to, meaning players must use a variety of towers for victory.

Playable Characters: One of South Park’s greatest assets are a large variety of colorful characters, which is represented well in this tower defense game adaptation. Predictably, Stan, Kyle, Kenny, and Cartman all make up the standard 4 for the first round of the campaign, but when playing through a second time or other modes of play, unlockable characters such as Butters, Token, Jimmy, and more are available.

Levels: At first, enemies follow a specific path, as with most tower defense games. But quickly, the levels become more open-ended, forcing players to create their own paths with snow walls. The only indication of a wall is elevation, sometimes making it hard to tell where there’s a hole, which can ruin an entire set up and force a restart. Overall, though, it’s a more satisfying experience to create one’s own pathway, than to play a pre-set one.

Multiplayer: South Park features up to 4-players, either locally or online, or a combination of both. The multiplayer certainly takes a bit of pressure off the game, as multiple players can control the chaos much easier. Unfortunately, in online battles, only the host can decide which characters to play as. It’s a big disappointment, as most guests would likely prefer to choose their own characters.

Bonus Content: In addition to unlockable characters, this game features bonus content such as mini clips of favorite episodes. Considering South Park is free to watch online, most of the bonus content is somewhat wasted, especially since many of the clips take the joke out of context. It’s a nice addition in theory, but in practice, feels shallow.

Despite the many great tower defense games found for free online, South Park Let’s Go Tower Defense packs in plenty of fun and content for 800 MS Points. South Park fans will definitely get a kick out of this quirky title.