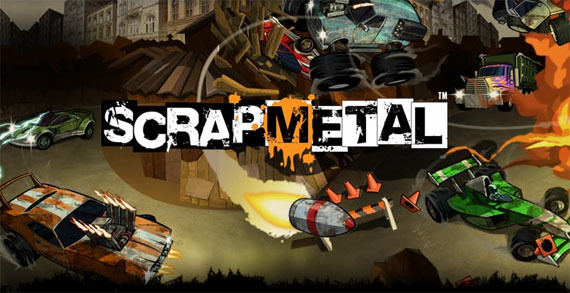 From Micro Machines, Mashed, Circuit Breakers to Super Skidmarks (tee hee) : the top down racer is an odd beast as considering the rarity of a title’s release within the modern market the genre’s fans are rabid. The slightest hint of an omnipotent camera angle hovering over cars starts to spread Internet fire, the comparisons to Micro Machines are drawn, the degradation of anything it does differently is deafening, and the handling methods are crucified before the miniature car gods.

But it’s not without purpose, the mantra of ‘if it ain’t broke’ is never truer than with the classic SNES/Genesis racers because they stood for pure multiplayer fun, however it’s important to know that with the exception of camera position Scrap Metal strives to be nowt like previous titles at all. Or at least, not a lot like them.

Scrap Metal is a combat racer, no screen edge of doom here as racers skid, bounce, and swerve around dirt tracks launching whatever default weapon is attached to their automobile, be it a machine gun touting hot rod, a missile launching 4×4, or a laser blasting F1 car, exploding other racers grants the more outlandish weapons which can then be utilized to royally ruin the efforts of everyone else on the track. As races heat up the track is literally set ablaze with destruction and misfortune as cars flip out on oil slicks and bulldozers flip unsuspecting swamp boats into on track flamethrowers, the game can become so hectic that the racing becomes secondary to the melee.

It’s not particularly sane then. In fact ‘utterly batcrap bonkers’ would be selling it short. But all this only really works with friends, when playing alone the slippy drifting will annoy, aggressive AI will irritate, and repetitive structure will bore players to tears, once three friends join in, however, these niggles become necessary ingredients in what makes Scrap Metal incredibly fun, slippy drifts lead to entertaining pile ups, an aggressive friend is simply causing for joviality, and you can pick and choose what you do when thus alleviating any boredom in track repetition.

So even though the core gameplay is different to other top down racers the moral is the same; gather three friends, online or off, and Scrap Metal becomes a riotous designer of entertainment, with enough tracks and modes (racing, tank combat, destruction derby, and elimination are but a small sample) to keep four friends sustained for a serious amount of time, much like any good game in this genre.

Alone however Scrap Metal’s list of challenges can soon start to infuriate, brief glimpses of variety lead to dire boss fights and a hackneyed garage system, you can only have four cars in your garage but some cars can’t go back to old events to improve your score, and some events need specific cars but then you need to spend money to upgrade cars but must delete cars to bring back scrapped cars to do old challenges to do (ARGH), does nothing but irritate and in many ways Scrap Metal’s single player need not even be present in the game.

And that leads to the final issue with Scrap Metal, considering its headache of a single player the high price point damages the appeal, purchased as a multiplayer title the game will reimburse its value ten times thanks to its great selection of modes, firework weapons, and purposefully off kilter handling, however those looking for an appealing single player to compliment their entertaining multiplayer, or those lacking in like minded friends, need not apply.