When the time has come for your business to upgrade to a more advanced storage system, it would be a critical mistake to look past the Synology DiskStation DS1513+. Equipped with a total of 5 NAS enclosures, the DiskStation is powerful, jam-packed with storage capabilities, and extremely versatile. While the DiskStation is not something you would expect an average consumer to purchase, that doesn’t mean it is not suited for the home. If you need a versatile storage device with more connectivity than you will know what to do with, then the DiskStation DS1513+ could be just what you are looking for.

With expansion bays expand your capacity up to 60TB

While it’s true that there are several other 5 and 6-bay storage solutions available at a similar price point, it’s the DiskStations dynamic storage space scalability, it’s wide variety of features and it’s world class performance which makes it stand out as one of the industry leading products. The robust web interface is easy to understand, and offers access to all of your data, and the other features available from one place, and while the advanced features may intimidate some of the novice users, setting them up is nothing that can’t easily be learned.

Something that you need to take into consideration is that storage is not supplied with the DiskStation DS1513+, so the hard drives will have to be purchased separately (If you order diskless version). The 5 drive bays can each handle a standard hard drive up to 4TB, offering a total storage capacity of 20TB. However, the DS1513+ can also host an additional two DX510 extension units, which can provide an extra 20TB of storage space each, providing the server with a total of 60TB, making the Synology DiskStation DS1513+ the perfect solution for either the data crunching business owner, or the multimedia mad home user.Although this Synology DiskStation DS1513+ Review is simply analysing the product itself, we can confirm that all purchases are covered by Synology’s 3-year limited warranty. Now that we have covered the basics, let’s dive in and take a deeper look into what this product has to offer.

The design aspect of an external storage device, especially one of this magnitude is definitely not one of the main priorities for the manufacturer. Is it important? Yes, we believe it is, but it’s the storage capabilities and the performance which will indicate how well a storage device is received by it’s users. Luckily, the DS1513+ is a great looking product, and with it’s matt black finish, it will fit comfortably into the decor of any home, office, library or anywhere else you want to keep it.

In terms of the dimensions, the DiskStation DS1513+ weighs in at around 9.4 pounds, and measures approximately 16 x 14 x 13 inches. While it’s not the biggest, or the heaviest storage device, it’s hardiness is admirable, and will surprise even the pickiest of consumers.

The DiskStation DS1513+ is the successor of the discontinued DS1511+, and while it still possesses some similar design attributes, the DS1513+ has a brand new tool-free design, which locks each hard drive in place to avoid accidental pull-outs, and can be adjusted without the need for screws. The drive bays are locked using one of the two small keys provided, so if you do decide to lock the drives in place, you better keep the keys in a safe place.

The front of the device hosts no ports, but there is plenty of additional hardware facilitation on the rear side, including four Gigabit ethernet ports, two eSATA ports, two USB3 ports and four more USB ports to allow additional drives to be connected to the NAS, as well as the option for a quick data transfer between the NAS and another external hard drive.

The Raid types that are supported by the DS1513+ include RAID10, RAID6, RAID5 and RAID1, however the majority of Synology NAS devices will automatically configure themselves via the SHR (Synology Hybrid RAID), which will make the setup, and the ability to add additional drives a lot simpler. 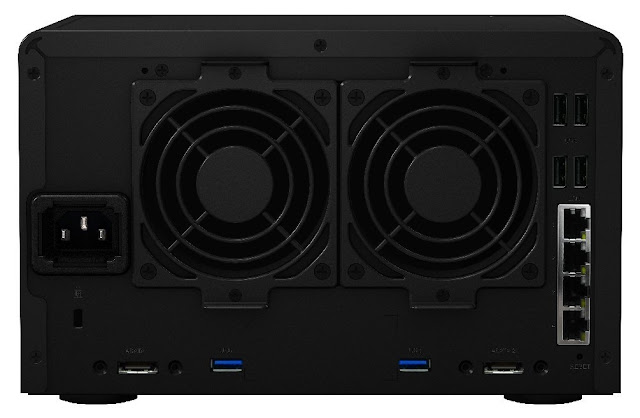 The ability to store a massive amount of data is great, but when the read and write speeds are lacking, the overall appeal of the device is severely damaged. With the DiskStation DS1513+, that is not the case at all. Our team carried out a multitude of different tests, and the results were astonishing. The SMB-based data transfers were providing a write speed of around 106MB/s and a read speed of around 95MB/s, where as the iSCSi tests were producing a significantly faster write and read speed of around 110MB/s and 65MB/S respectively. Read Customer Reviews.

What makes the DS1513+ so powerful? We don’t want to put words in Synology’s mouth, but we would generally assume that their response would be because of the dual-core Intel Atom D2700 processor, and the 2GB – 4GB memory which this device can accommodate. Again, there are similarly built storage devices which can operate at similar speeds, but the catch-nine is that they are generally more expensive. In terms of the power per dollar ratio, the DiskStation DS1513+ is leaps and bounds above everything else.

Throughout the testing period, the server was almost silent, and the only audible noise was coming from the internal hard drives processing. The power consumption is on par with everything else on the market, and because of it’s minimal design, the DS1513+ never runs at temperatures which would be a cause for concern.

Ease of use is another important selling point, and one which the majority of novice users look for. The DS1513+ is equipped with a robust web interface which utilizes the company wide Synology Assistant. The main software, as well as the rest of the additional desktop softwares can all be downloaded from Synology’s website, and they are all available for both Windows and Mac. Out of the box, the DiskStation DS1513+ comes with the DiskStation Manager OS Version 4.2 pre-installed, which in our opinion, is the best firmware available for NAS servers.


What Does Everyone Else Think About Synology DiskStation DS1513+?

As you can probably tell from our own Synology DiskStation DS1513+ Review, we don’t have anything negative to say about it, but what does the rest of the industry think?

The reception for the DiskStation DS1513+ has been phenomenal, as all of the major technology review websites have given top ratings, and overall positive reviews. For example, Cnet have awarded the DS1513+ a 9.1 out of 10, and the only negative point they made was that the advanced features could be a little bit tough to grasp for the novice user. While the advanced features can be a little tricky to get your head around at first, we believe it’s pretty simple to pick it up, so it’s not much of a negative in our opinion. TechRadar, another popular and knowledgeable review site have also took a liking to the DS1513+, with another positive review, and a 4 out of 5 star rating.

It’s not just the tech review giants who agree with us on this one either. User reviews on Revoo have awarded the DS1513+ an 8 out of 10, which is definitely justifiable.

It doesn’t take a genius to conclude what we think of the DS1513+. It’s a good looking, solid, well-built machine with an incredibly powerful inside to match it’s tough exterior. The user interface is easy to use, and the storage scalability is incredible for this price point. If you are looking for a NAS device, and you have the budget to accommodate this steep, yet reasonable price tag then we highly recommend that you snatch one up right away. Read Customer Reviews. 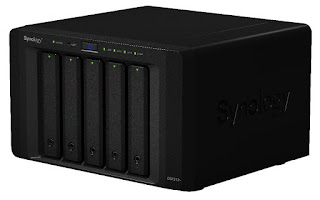 The only disclaimer we will leave you with is that the DS1513+ is a powerful device with a huge amount of storage space. For small to medium businesses, it is the perfect choice, but for home use, it is worth considering how much space you really need. If 60TB (you can scale up to 60TB when using expansion bays) is enough to get your engine revving, then go ahead and pick one up, but if you know it’s going to be overkill, then there are some cheaper alternatives that would possibly suit you better.