When it comes to computers we have often heard about RAM and ROM – two different types of memory. But how do they differ from one another and even more – from mass storage devices like a hard drive or solid state drive?

First RAM and ROM is more often described as memory, not storage and believe us, there is a difference. While the word “storage” usually is used for describing a device that can only hold a specific amount of data like HDD or SSD (don’t operate with data just hold it), RAM and ROM is a bit different. Of course, while these memories also have their limitations of memory they can hold, they are used for different purposes. Let’s find out the main differences and real world appliances of RAM and ROM.

Explanation of RAM and ROM

Let’s make this as simple as possible without getting into some complex computer science. The main difference between a RAM and ROM is how do they store memory and operate with it.

ROM is a Non-volatile memory, to make it simple, ROM can keep information saved with or without a constant power source. If you turn off your device, information will still be in ROM chip. However, things with RAM are different, RAM is a Volatile memory which means it can store information only when there is a power supply. If the power is turned off, you will lose all RAM information.[su_youtube url=”https://www.youtube.com/watch?v=wJ4dAFI7xLw”]https://www.youtube.com/watch?v=fTSUgXkfooA[/su_youtube]

There is the only difference in operation. While ROM only contains pre-programmed applications – it’s used only for reading data, RAM writes and information. RAM used to manage currently running tasks, therefore, it has to continuously read and write data. This is why RAM is one of the fastest memories on a computer. On the other hand, writing memory on a ROM is a fairly slow process. Then there is chip size.

Then there is chip size. Nowadays we can buy a RAM in a single stick that has a memory of up to 16GB where ROM has only about 4MB.

Different Types of ROM and RAM

There are two types of RAM –  static RAM and dynamic RAM. Static RAM is generally more expensive but also has a higher capacity. Static RAM uses multiple transistors in each cell, where dynamic RAM uses a transistor paired with a capacitor which means it requires constant refreshing. 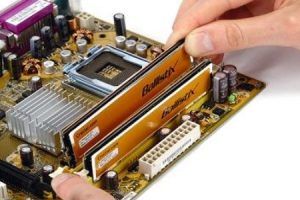 Talking about what RAM and ROM do and describing their definitions is one thing, another is understanding real word appliances. Probably, people know more about RAM is it’s much more frequent subject to talk about than ROM. I bet most of gamers and people who know something about RAM has an idea of why it’s needed. You can find RAM is basically any intelligent up to date computer as well as smartphone, tablet, navigation and so on. It works hand in hand with your processor to process specific applications. We all have seen RAM sticks in our computers. Over time people want to get more and more RAM to run heavy applications like AutoCAD or demanding games. 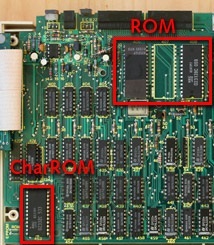 Next, there is ROM and I bet this is where most of you start to think “So where is ROM used?” One of the most common real world applications for ROM is in your motherboard – computer BIOS. Computer’s motherboard has an IC chip with pre-programmed initial computer startup. This is because you can only begin the start up with a Non-volatile memory (memory that’s saved even if the device is turned off). ROM was also very frequently used in gaming system cartridges. For example, Gameboy, Nintendo and so on. Another appliance for ROM is micro controllers like Arduino. They use Atmega chip that can be programmed when the microcontroller is connected to the computer. Once you apply voltage, the microcontroller will execute this program. And as micro controllers are everywhere – in vacuum cleaners, phones, basically any electronic device, ROM is also everywhere. So ROM is actually very frequently used even if you don’t see it so often.