Gaming on a console has become so commonplace that manufacturers come up with all types of handy extra gadgets to better your experience. The PS4 Pro has been out for quite a while now and has plenty of these interesting devices that you can add to it. One of the more practical ones are PS4 Pro vertical cooling stands, seeing how multi-functional most of them are and how they add extra safety for the more performance-heavy Pro.

What are PS4 Pro Vertical Stands?

Most of these systems come with a couple other handy features, not just cooling fans. Mainly these are extra USB ports for your PS4 Pro and a charging station, usually for two DualShock controllers. Since the Pro isn’t as widespread as the original PS4 console, the cooling stand market for the slightly larger Pro is quite limited and repetitive. Still, some models stand out with either interesting features, design, or especially positive reception from customers.

One of the best cooling/charging stands for PS4 Pro, the KingTop vertical PS4 charging stand has basically everything you’d want from such a device. It’s compact, it has a dual charging station with LED indicators, 3 extra USB ports, a 2-speed cooling system (regulated with a simple switch), and the stand is also compatible with all versions of the PS4 (standard, Slim, and Pro). This Stand is also well received by customers, so it’s an all-around great purchase. 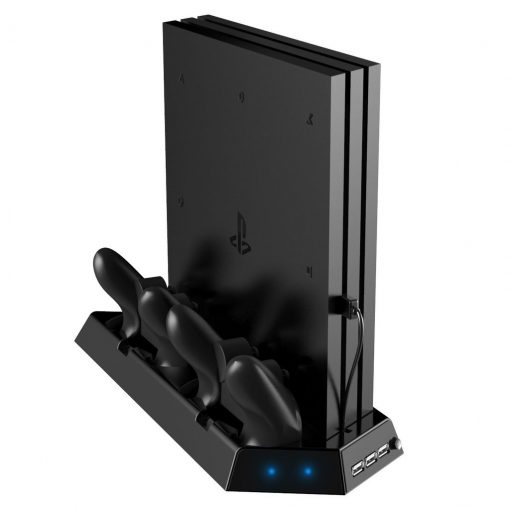 This stand from ADVcer has a lot to offer to PS4 Pro gamers – 3 extra USB ports, cooling, and dual controller charging. This stand will therefore take up a little bit more space than most other, more narrow stands, but is compact enough for most rooms regardless. There’s also a smaller cooling stand with supposedly stronger fans, but some users have reported them to be quite loud, for a small fan at least.

Another simple yet effective vertical stand model, this time from INSTEN. This PS4 Pro stand features 3 extra USB ports and a dual charging station alongside the cooling system. It also has LED lights that indicate whether the controllers have finished charging. In short, this is a handy vertical stand for PS4 Pro since it is both compact and versatile.

This PS4 cooling stand from FastSnail covers most of the basic needs of any PS4 console user. The stand has, as the name suggests, integrated cooling with 3 fans, a DualShock controller charging station for 2 controllers, as well as 12 slots for you to store your game CDs in. Not that a single user will gain much from this, but the stand also comes with a special slot for the PS4 Slim and is compatible with PS4 and PS4 Pro as well.

Unfortunately, Fastsnail’s stand a bit short on USB ports, only providing one slot in the place of the one on the console that you’ll have to use to power the stand. Overall, this stand has everything you’d ever want from such a device for a very reasonable price, and it also has good customer reviews.

Amidst all of the fan-cooled systems, we decided to include a simpler option that might be enough for some people. The Younik vertical stand is a simple stand that only has vents for more air access and some anti-slipping rubber pads. Accordingly, this stand will cost upwards of $10 less than other models from this list. 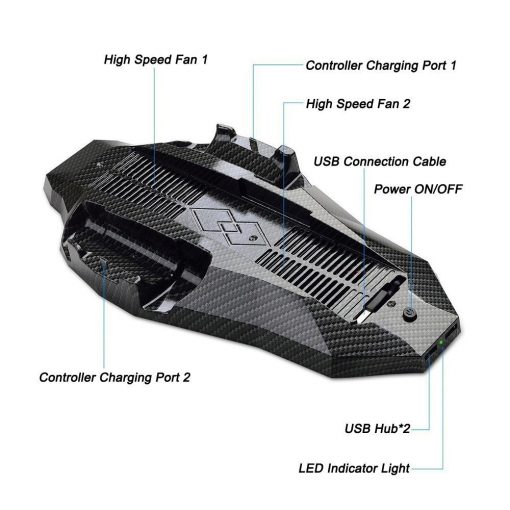 These рrоduсtѕ wіll hеlр уоu mаnаgе thе console ѕуѕtеm іn a very efficient wау. They wіll save space аnd your PS4 Pro system will be kept at a safe temperature so that you аrе аblе tо рlау gаmеѕ for еxtеndеd hours. In short, аll of thеѕе рrоduсtѕ frоm different brаndѕ are a grеаt рurсhаѕе аnd wіll dо their job well.