Gaming has become a huge part of our culture. Whereas before it was a niche hobby, it’s now a mainstream social activity as well as a bona fide sport. We’re also a very mobile society and these two things collide to make traveling with an Xbox One a very common thing. And if you’re going to be traveling with valuable electronics, you want to protect them, which is why it’s so important to protect your Xbox One with a dedicated Xbox One travel case.

What to look for when buying an Xbox One travel case

A good Xbox One travel case will be made out of a durable material like nylon to prevent tears and fraying of the fabric. Some cases are also waterproofed, so if you need a waterproof case, be on the lookout for waterproof case materials; even if you don’t live in a rainy climate, it still might be a good idea as an extra bit of protection, because who hasn’t spilled their coffee at least once?

Also, the best Xbox One travel case will be one that has multiple compartments. After all, you don’t just travel around with your console by itself. Chances are, if you’re taking your console somewhere, you’re bring all of your accessories (or at least the vital ones) with it, so it’s a good idea to look for an Xbox One travel case that has compartments or pockets to keep your accessories nice and safe.

Finally, check to see if the Xbox One case is padded. Padding adds an extra layer of protection—especially from drops and other jarring and shocking accidents. Since the main reason to get an Xbox One travel case is to protect your Xbox, it’s just smart to get one with as many protective features as possible.

Keep a few things in mind while shopping to get the best Xbox One travel case for your needs: 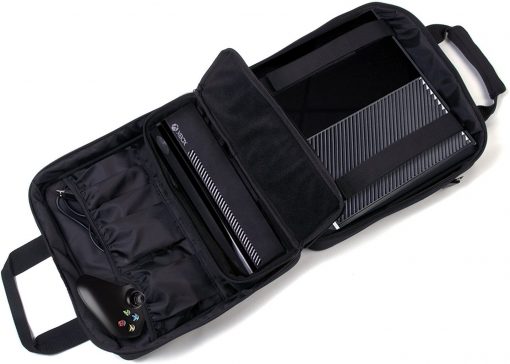 Like many console carrying cases, CTA Digital’s Xbox One travel case is made with Nylon. Nylon is a durable fabric. As a synthetic, it’s also less likely to retain moisture and mildew if it ever gets rained on.

Aside from the main pockets, there are two internal and two external accessory pockets as well as five-disc pockets for your games, for a whopping total of nine pockets. This should fit the needs of most players, because it allows versatility for packing your gear.

The CTA Digital travel case features a removable pouch for your Kinect. Since not everyone owns a Kinect, the optional pouch is a pretty good design, because if you don’t need it you can just take it off.

This case is foam padded to add an extra layer of protection for your console and its accessories. Also, there’s a build-in strap inside the main compartment of the case to secure your Xbox one. One of the biggest complaints people have about console travel cases, in general, is that they don’t always fit the console snuggly so it moves around too much inside. The straps on the CTA Digital Xbox One travel case act like a seatbelt for your console, keeping it safe and movement-free.

What to like about the CTA Digital XB1-MFC Multi-Function Carrying Case for Xbox One/Xbox One S: 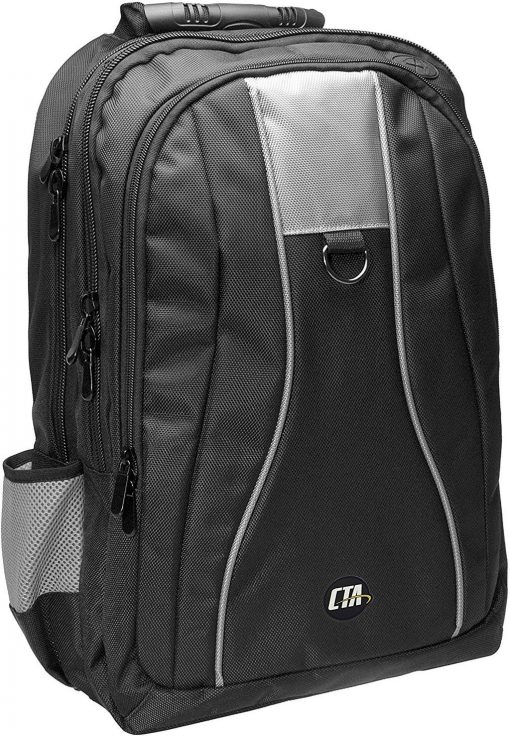 Since this gaming backpack is universal, it’s not only usable for Xbox One; you can also use it on PS4, PS4, Wii and more. Some households are multi-console households. For those families, the CTA Digital Universal Gaming Backpack is a great option, because it’s versatile enough to travel all of your consoles, so you don’t have to buy several different dedicated console travel cases.

There are three main zipper layers, the biggest of which naturally holds your Xbox One or another console. There are also five storage areas for your accessories, so you can be sure that all you need will fit in the one bag.

The adjustable shoulder straps are padded, meaning less strain on your body. Travel on its own is fatiguing enough, so this is a feature anyone could appreciate.

What to like about the CTA Digital Universal Gaming Backpack: 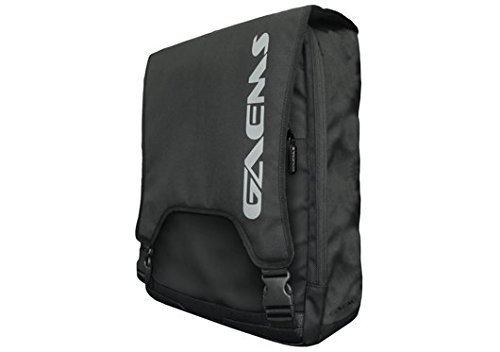 This is a true multi-console backpack designed for the more recent PlayStation and Xbox consoles, meaning if you have an Xbox One and a PS3, you can use the same travel case for them. This is ideal for families with more than one console; chances are, you’re only going to be traveling with one console at a time, so there’s really no need to have multiple dedicated cases when a universal travel case will do.

The GAEMS Universal travel case is equipped with reinforced foam padding, going a step beyond in protecting your precious consoles from whatever perils may befall them on the road.

The waterproofed nylon composition makes this a great case for those with kids or who simply want a case that can handle whatever life throws at it—including an unanticipated downpour on the day you thought you’d walk to your destination instead of taking an Uber.

This is a unique feature, because while Nylon is a common material in all the best Xbox One travel cases, the GAEMS case features Nylon mesh inside to better disperse any heat buildup. As anyone knows, electronics are at their healthiest when they’re kept cool, so this is a quality feature that cannot be ignored.

What to like about the GAEMS Universal M155-Console Backpack: 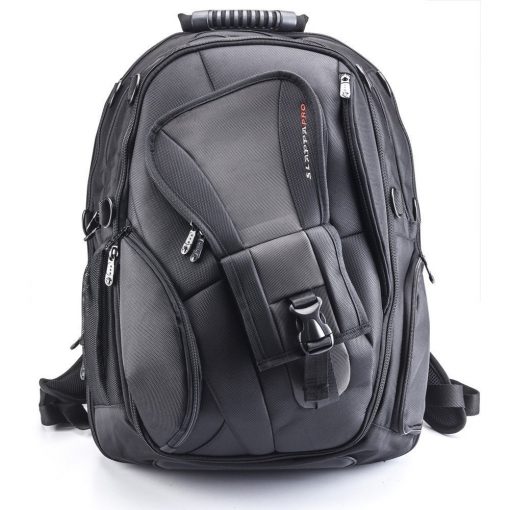 Not only can the Slappa Custom Build Backpack hold your Xbox 360, it’s an extremely versatile backpack capable of holding any other console you own, and can also hold a 17-inch laptop. Essentially, if you need a case that can travel any of your portable consoles or devices, this might be a good pick for you.

The Slappa backpack is a great bag for traveling by plane, because it’s guaranteed to be checkpoint friendly, so all you have to do is just put the bag through the scanner at the airport without having to dig through everything and dump it out.

Water and puncture-resistant 1680 denier Ballistix nylon kick the quality up a notch on this travel bag. Let’s be real: Unexpected things happen while traveling. A travel bag made of high-quality material is a good way to be extra prepared for whatever comes your way.

Because the case is so versatile, you can store other things besides your Xbox one or laptop. You can also store everyday items like your wallet, your iPhone—anything that’s small and needs a handy place for storage during travel. All in all, it’s a pretty cool pack.

What to like about the Slappa M.A.S.K. DSLR Custom Build Backpack (SL-MSK-DSLR): 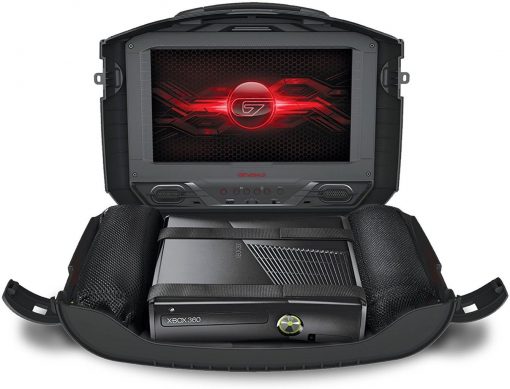 While this isn’t a traditional Xbox One travel case, it is a gaming environment that not only works with Xbox One, but is also great for traveling and is TSA-approved. Traveling by air with your Xbox One just became a lot easier.

Game on the go

The included monitor means you can game on the go as long as you have a power supply, making it ideal for gaming on the road and in unexpected places.

You’d think such a compact design would preclude controllers, but you’d be wrong. The GAMES G155 Sentry Personal Gaming Environment makes room for your controllers, so you don’t have to worry about sourcing an extra bag for them.

One of the main reasons this personal gaming environment makes such a good Xbox One traveling case is the fact that it’s incredibly durable. The outer shell is durable, which makes the hazards of traveling with a console and monitor far less daunting than they would be otherwise.

What to like about the GAEMS G155 Sentry Personal Gaming Environment: 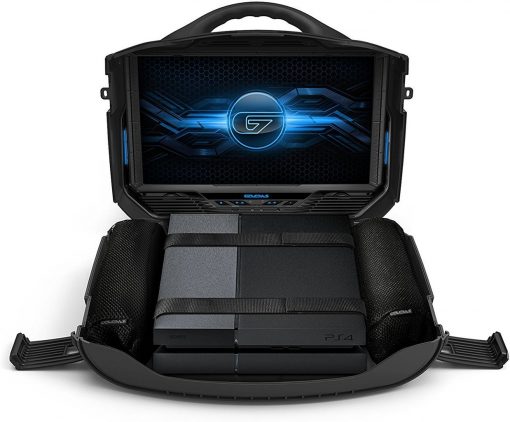 Because it’s a carrying case that has its own monitor, you can game anywhere you want—even while you’re stuck for an insanely long period of time at the airport. (After all, time flies when you’re having fun, so bringing some entertainment along is always a good idea.)

The 19-inch HD 720p monitor features an LED display so your games can be visualized beautifully. Also, as you already know, gaming consoles are great for using with your favorite online streaming service, so “Netflix and chill” is entirely possible with the GAEMS Vanguard Personal Gaming Environment.

This gaming environment is compatible with all of the most recent Xbox and PlayStation consoles, so if you’re a multi-console family, you needn’t track down various personal gaming environments when you have all you need right here.

The case shell is tough so you can be sure your monitor and console remain nice safe as you travel the world. Also, it’s TSA-friendly, making it perfect for air travel.

What to like about the GAEMS Vanguard Personal Gaming Environment for XBOX ONE S, XBOX ONE, PS4, PS3, Xbox 360: