When Xbox 360 came out, it had just 4GB hard drive and supported external storage up to 32GB. That sounds ridiculous now, newest AAA Xbox games can take up to 50GB, and I’m not counting updates and DLC. 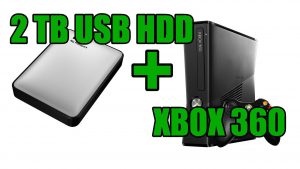 The Good News – Xbox 360 Supports External Hard Drive Up to 2TB. The Xbox 360 received a system update in spring last year, since then it supports external storage devices with capacity up to 2TB. That’s fantastic! But the next question would be – which is the best Xbox 360 external hard drive? We have created a list of Top 6 external hard disks that will work great with Xbox 360.

One thing to know before purchasing your external hard drive:

The Seagate Game Drive is our Top pick so that I will discuss it a little bit more detailed. What should you know about this drive?

The Seagate Game Drive is an excellent storage device for those who are willing to pay extra and get more premium device and the only external hard drive designed exclusively for Xbox. This external hard drive has a capacity of 2TB, which is four times more than original build in storage! However, if you want to use this hard drive exactly for Xbox 360, don’t let your storage greed pick you a 4TB version because it supports only Xbox One, but 2TB works for both – Xbox 360 and Xbox One.

Besides Seagate Game Drive, there are many good external hard drive alternatives worth to be considering with their special features.

Seagate Backup Plus Slim 2TB (full review) is a great classy looking device that offers you an opportunity to get 200GB of free OneDrive cloud storage for 2 years.

Another member of Seagate family – Seagate Expansion 2TB (full review) that claims to be the fastest external hard drive with its SuperSpeed USB 3.0 file transfers.

Then there is a genuine quality and very popular external HDD – WD My Passport Ultra 2TB (full review), a solid, simple hard drive.

For those who love to carry their games with them all around – for example -from one place to another -while riding a bicycle or running, or just want to keep their hard drive safe from an accidental drop in water should choose Silicon Power 2TB Rugged Armor A60. A rugged, waterproof device.

And at last but not the least Xbox 360 HDD 500GB, for those who need just a slight storage update, from an original manufacturer.

For those who own a Sony PlayStation 4 console, make sure you check out our article about our Top 7 PS4 internal hard drives by clicking here.

Some other considerable choices